It Was a Long Way, Baby

July.  That’s when we started wondering if this was the right thing to do.  Things kept going wrong.  We felt like it wasn’t meant to be after just two weeks.  It was horrible. But then again, I guess the bad luck didn’t start with moving to this house.

It had been going on for months.  This was the fourth house we went for.  The first we saw & loved was already under contract by the time we asked.  It was 40 acres and….oh, nevermind.  The second house we fell for had been a HUD home.  It needed alot of love, but then again, it was only 50k.  I love projects, so we thought it would be perfect.  We could lower our mortgage payment, pay off bills, etc.  That was March 21st.  After over 2 months of HELL and almost a thousand dollars later, the inspector informed us (and the seller bank) that the house didn’t have pipes or electric to the well, meaning it wasn’t ‘move-in ready’, which meant it went from a financing house to cash only.  We were heartbroken, stressed, and exhausted from the experience.

However, we were packed, we disliked the city & neighborhood we lived in, so we started all over again.  We went and looked at many houses.  Not an easy feat since the area we were looking in was 3 hours south of where we currently lived.  But we kept up hopes, and went every weekend.  We found one we really, really liked in Deer Trail.  Log cabin look, but modern.  Huge.  But it needed too much $$ to make it habitable (the previous owners started work & didn’t finish).  So, that was out.  Poo. We then fell in love with a place in Yoder.  I still can’t say that name without giggling.  Anyway, it was awesome.  An old house built in the early 1900’s AND a nice manufactured house.  Both big enough & ready to move-in.  It had a detached partially built house the size of an efficiency apartment on the 40 acre property.  It had 2 single garages, and one HUGE garage/barn, plus 3 more out buildings.  What’s not to love?  We put out offer in.  Started the paperwork rolling.  A week later, someone came along & offered the lady cash for it.  Needless to say we lost the property.  Damnit!  The next house was in Rush.  Another with 40 acres.  Many outbuildings including 2 tiny houses from the late 1800’s. We didn’t get very far on this one.   Someone put a bid in (cash again) on the same day we did.  Lost that one.

By now we were do deflated.  Contemplating giving up.  I mean, what bad luck!   It was June.  We’d been at this since March.  But, as I was searching online, I came across a property in Deer Trail which wasn’t listed on the main sites.  Almost 3000 sq. ft, a warehouse-like garage, chicken coops and on 6 acres in the woods.

Now mind you, if you are east of the mountains here in Colorado, there is plains.  Miles & miles of……brown, treeless, blah.   However, this place was in a little cropping of wooded area in mid-east area of the state.  So, hubby said, “OK, I’ll stop by on the way home from work” (It was actually a 3hr detour).  He fell in love.  There were bids already in.  I couldn’t get down there to see it ’til the upcoming weekend.  He took pictures, came home & showed me.  The next day (site unseen from me), he put a bid in.  They came back with an opportunity to re-bid as another bid was going to be accepted. For fear of losing it, we bid everything we could (and some we couldn’t) to get this property.  Scary.  We couldn’t afford this house with still owning the Greeley house.  There would be no money left for repairs. 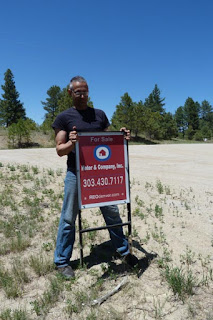 But, we did it.  The bid was accepted, and the ball started rolling.  It wasn’t smooth.  Lots of issues came up.  Plumbing.  Well.  Septic. *sigh*  But we went forth.  It was a very stressful purchase.  Nothing went right.  More money & more money was needed from us.  Even four hours before closing we had to shit out 4k extra dollars we didn’t have.  PITA!  Finally we closed on June 31st.  We became owners of the house in Deer Trail.  Should we have really stuck it out?   Was someone trying to tell us something?  I don’t know, but it is what it is, and the days that followed really had us ready to move right back into the house we STILL owned in Greeley.  But we didn’t.  We’ve worked hard, we’ve (unfortunately) gone into more credit debt, but we’re making this house a home.  Through the last month we’ve shed tears, screamed in anger, and had the urge to give up.  But we didn’t.  We still love it. Kinda.  Yep.  Hard to believe, but we do.